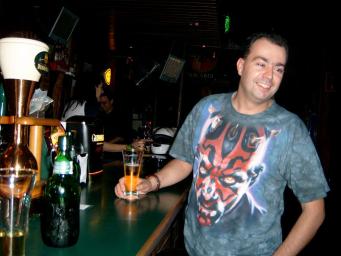 I'm far too lazy to put up all my pictures, but here's:

If you're a C++ programmer who needs to interface with a database, please take a look at my C++ PostgreSQL frontend.

You may also want to take a look at my C++ Wishlist page. This documents a few features I'd be interested to see, or at least to ponder, for the C++ language.

We all know it: there are too many Three-Letter Abbreviations (TLAs) in the world. The GPL'ed TLA FAQ not only gives you an impression of how many there are, it also gives you their meanings.

Programmers in several languages (including C, C++, and Java) may like this. The unpaste program intends to help you find those pieces of code that have been copied all over your project instead of put in one reusable function, class, or whatever as they should have been.

Now available here: my 1996 Computer Science MSc thesis, written at Leiden University. In Viability of a Parsing Algorithm for Context-Sensitive Graph Grammars (available in PostScript format), I describe how I implemented, optimized, and fine-tuned the Rekers-Schürr algorithm for parsing graph grammars. Some theoretical work was done as well.

The implementation described is not currently available on this site (it may be on the Leiden site somewhere), and was written in a now-outdated C++ dialect that won't compile on today's compilers without extensive changes. The implementation is set up as a parser generator, conceptually similar to yacc or bison, except that it parses languages expressed in graph instead of in text form. Typical examples of languages one might want to parse in this way are Petri nets, electrical wiring diagrams, process or control flow diagrams, or entity-relationship diagrams.

None of the material in these pages has anything whatsoever to do with my employer unless explicitly noted. Nor do I speak for my employer; they are quite old enough to speak for themselves.

Some websites I've worked on, for myself or for friends. Mostly they're not much to look at, but they come together fast and I go for a sober, functional style.

Branding. It's like lying for people without a basic grasp of statistics.

Somebody explain to me how water + concentrate + other stuff = 100% juice.